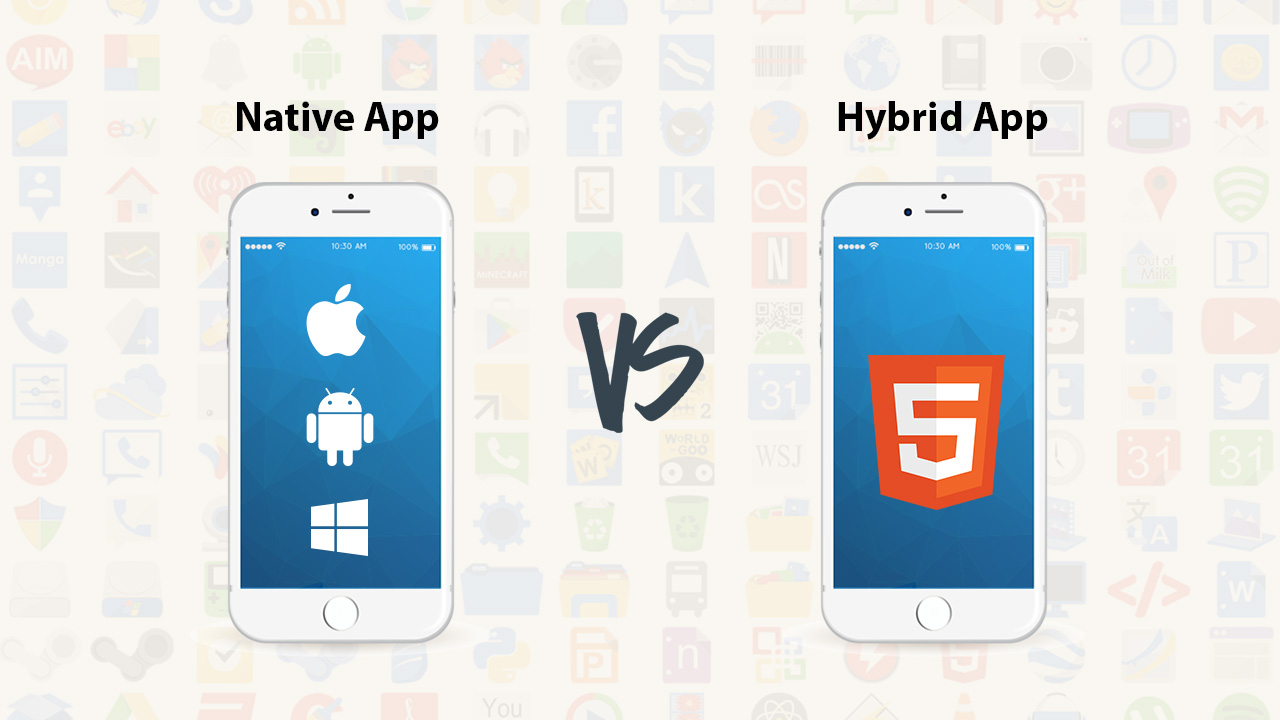 While developing mobile applications for various clients, we learned that it is a big dilemma to choose between a NATIVE and HYBRID Mobile Application. Native or Hybrid Mobile App –They have certain pros and cons. Which one to select and why? Usually, there is no precise answer for this. It all depends on the need, timeline, budget and developer’s expertise. In this blog, we are going to explain the difference between a hybrid mobile app and a native mobile app- the pros, and cons and how it can help your business and business needs. Let’s start.

The evolution of customized app development has touched new heights. Developers are not only ready to work with smartphones and tablets, but also with various wearables and smart devices. Multiplatform development has become the need of the time and it allows businesses to create more optimized products. Then it comes to the decision between a hybrid or a native app. Furthermore, as we explained in one of our previous blogs, How Mobile Apps are Increasing Productivity and it has already dominated most of the industries.

Native apps are mobile applications developed precisely for a specific mobile operating system. For iOS, we usually use swift and for Android we use Java. As native apps are for a specific platform, they can take advantage of operating system features. It has the ability to use device-specific hardware, software, and it can use the latest technology available on mobile devices such as a GPS, camera, one touch pay and figure print.

Let’s check what could be the benefits a business and its users can get from a native app.

As native apps are developed specifically for a certain operating system, they are much faster and more refined than their other counterparts. Performance makes Native Apps the first choice for high performance games and applications.

Users choose either Android or iOS based on their individual characteristics. So, if someone is using Android since a long time, they won’t face any problem in accessing their way around the app which follows platform specific UI standards. So it became very user-friendly. Same applies for iOS users.

Native apps can be searched more easily by users in the App Store because apps with better UX get featured more frequently. So, it is easy for a business to reach its potential audience in a short span of time.

Native apps can easily tap into any kind of device’s functionality, such as camera, microphone, calendar, GPS, figure print sensors, motion sensor etc. So the app accessibility is very high.

Because native apps have to get the approval of app stores they are developed for, the business can be assured of complete safety and security of the app. These apps also can get complete support of the concerned app store and marketplace. Moreover programmatically native apps could be developed more secured compared to hybrid apps.

It is very important to know what could be the cons of anything. So, let’s check this out.

As a native app is targeted to a specific OS, requires more time to develop for every single platform. So developers need to write specific codes for iOS, Android etc. As a result, to provide a quality product, the overall development time is longer.

As the development cycle is longer, native apps are little expensive compared to other hybrid or web application. Even the maintenance and upgradation cost is little high. But in long run, Native Apps pays back.

As users of different devices may be using different versions of the app, it makes difficult for the developers to maintain and offer support.

Now let’s talk about the other form of mobile apps: Hybrid Apps. Hybrid apps are basically a combination of native and web apps. It is an application in which the same app can be deployed in various operating systems like Android, iOS, Windows, etc. and even can run in various browsers (Chrome, Mozilla, IE, Safari etc.). It works on “write once and deploy everywhere” principle. Hybrid apps are cross-platform and can be distributed between app stores immediately without several versions. Most of the hybrid apps built using cross-compatible web technologies (HTML5, CSS3, jQuery Mobile, Titanium, PhoneGap and JavaScript etc.).

Let’s make a note of the business and user benefits of a hybrid mobile application.

One of the biggest pros of a hybrid app is the lowest cost of development. As you are not going to create several versions for different app stores, the development cycle is lesser too.

Hybrid apps are very easy to scale up to a variety of platforms and OSes. This is because web technology is almost 100% similar across different platforms. So the code can be simply reused with no need to rebuild the entire app from scratch.

As the development cycle is less and we already saved time by coding only once, the initial launching time for hybrid apps is less. Apps undergo quality assurance testing like a standard software or website. Initial testing can be performed from a web browser. App store distribution and platform testing are quick.

Just like pros, few cons will also come in that case of hybrid apps. Let’s highlight those.

This is a big concern for hybrid apps. A hybrid app can never provide users a fully native experience. Native apps use system interface components which are user-friendly, can create a meaningful solution and can help maintain the overall workflow. This can’t be achieved with a hybrid app without compromising performance. Better UX allows more customer engagement and the future of the app.

You simply can’t put all desired features in hybrid apps. Both Android and iOS have few features exclusively for their OS. You can never integrate those in a hybrid mobile application. This is little disappointing for the users.

Another concern with hybrid apps is the way they load content is glitchy. Sometimes the loading time is slow. This is in contrast to the smoother native apps. But there are many solutions to fix glitches. In Apogaeis, we make sure our developed apps avoid glitches.

Design issue remains a factor as different OSes operate differently. So the designer needs to fix the style as per different OS. In the process of fixing, it may force to initiate new challenges. The scope of graphic and visual representation is limited in the case of hybrid apps.

According to us, choosing whether to go native or hybrid app development should not only depend on your current requirement as well as it should focus your future business plans. Let’s discuss a scenario which can clear the dilemma.

For example, you have started an online food delivery business and users can order food by using your app. You don’t need any complex functionalities or features in it and should make it as simple as it can. In this case as there are no complexities involved, you can go for a hybrid development model.

Remember, there are many food ordering apps which are native as business owner decided to not compromise with quality at all.

You have a plan to develop one mobile game and have already the list of extra features with you which you want to add in future. In this case, when the application is expected to get more functionalities in future based on the user feedback, Native development is the best way to go.

Remember, there are few games which are developed following Hybrid development approach. Even few complex retail apps are developed using a hybrid approach.

The best example is on Facebook. Facebook switched from hybrid to native in 2012. To know more check here. Even after having Native Facebook App, users complain about speed.

Mobile development is transforming with business are approaching hybrid apps. With a quick development cycle, less cost and expected results, businesses are keen on building hybrid mobile solutions. Which is good to some extent, but with certain limitations. Hybrid apps are now allowing developers to take advantage of the benefits of both kinds of apps. We know hybrid apps have limitations in execution, but today’s developers are increasingly coming up with solutions to overcome those challenges.

No matter what your concerns are, we, at Apogaeis, are here to help you out. We have a team of world class developers, who can give your business idea a mobile touch. Let us know your requirement, and our support team will get in touch with you within 24 hours. Our team of expert will analyse your need and suggest you the best development methodology. No regret in utilising A FREE CONSULTATION.